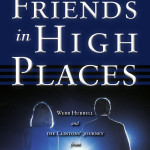 In 1997, Webb Hubbell’s autobiography, Friends in High Places, was published to critical acclaim. His current publisher, Beaufort Books, recognizes its importance to the political discussion going on right now and has decided to make sure it is available to a much broader audience by way of e-books and paperback.  It offers a different picture of Hillary Clinton than is being offered by the media these days.

Before the nation came to know them as the President and First Lady, Bill Clinton and Hillary Rodham were close friends of Webb Hubbell’s. Hubbell offers insight into how he and the Clintons climbed the political ranks from Arkansas to the White House.

Included in this book are intricate tales of Hubbell’s support of Bill Clinton in his tensest moments; his friendship with Hillary Rodham Clinton; the tragic death of Vince Foster; details of his involvement in Whitewater; an inside look at the Justice Department and partnership with Janet Reno.

Hubbell’s story is told from the perspective of one who personally knows the former President and First Lady. Their friendship began when Hubbell and Hilary Rodham Clinton were partners at Little Rock’s Rose Law Firm; and when Bill Clinton worked as Governor of Arkansas, Hubbell served  as Mayor of Little Rock, and later as chief justice of the Arkansas Supreme Court. Hubbell joined the Clintons in the White House as associate attorney general, the third highest ranking member of the Justice Department. His political career ended, however, with the Whitewater scandal and incarceration in federal prison. Hubbell comments on his resignation and prison sentence, and reflects on his old friends.

The journey is Webb Hubbell’s, yet his recounting resonates with the humanity in us all: the love he shares with his wife and family, the grief over losing friends to death or circumstances, and humility when faced with calamity. In the end Hubbell faces the truth with a steadfastness seldom seen in Washington.

This new edition includes a new introduction and epilogue.

Pre -order your copy of Friends in High Places or order copies of Webb Hubbell’s novels, Ginger Snaps and/or When Men Betray at your neighborhood bookstore, order them online at Amazon, B&N, or iBooks, or if you want autographed copies go to http://webbhubbell.com/books-by-webb-hubbell-when-men-betray/ .