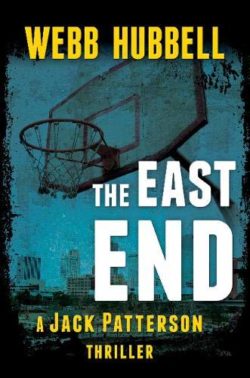 Autographed copies of the latest in the award winning thriller series, “The East End” is now available for preorder at my website, webbhubbell.com. Copies are also for preorder at your local bookstore, Amazon, and Barnes and Noble.

Here is a sneak peek:

Jack Patterson returns to Little Rock at the request of his boyhood friend Sam Pagano, but when Jack arrives, he’s abducted and taken to a remote swamp where he’s beaten and lynched by men set on revenge. Clovis Jones, his friend and bodyguard, finds Jack near death and gets him to a hospital.

As Jack recovers, he learns Sam’s college sweetheart, Jana Hall, is now a doctor who established and ran Arkansas’s health clinics for the poor including one in Little Rock’s East End. Jana’s efforts stepped on the toes of some powerful people, including someone who wants her clinics shut down, her medical practice ended, and for her to spend the rest of her life in jail. Meanwhile, someone has killed the men who tried to lynch Jack, and Jack is the prime suspect in the murders.

To make matters worse, Jack must defend Jana without the aid of his trusted assistant, Maggie, and his usual co-counsel, Micki Lawrence. Jack faces an unethical special prosecutor, a judge on the take, and the shadowy power broker bent on destroying Dr. Hall and her health clinics. Why Jana has become such a target, no one seems to know. Every time Jack thinks he has caught a break or sees a way to exonerate Dr. Hall, his adversaries or his client put a new obstacle in his path, including a second killer bent on settling an old score.

Jack’s courtroom tactics fail, his client wants to plead guilty to protect her patients, and in a last-ditch effort to overcome the long odds against his client he resorts to a complicated and dangerous strategy. The strategy will either save Jana’s life and reputation, or get Jack disbarred, his client put away for life, or worse―get Jack killed.

Speaking Opportunities:  Contact me at [email protected] to arrange for me to speak to your organization or institution in 2019. I also love to talk to book clubs and community groups in the Charlotte area.

Books: There are still plenty of copies available for purchase of the award-winning Jack Patterson Thrillers, including A Game of Inches. They are available for birthdays, thank you gifts, and just to be nice presents. Autographed copies are available at my website, webbhubbell.com.  Amazon, and Barnes & Noble are also selling hard copies and eVersions, and local independent bookstores either have them in stock or can get books from my publisher, Beaufort Books. If your favorite bookstore has run out, ask them to order your books today.

Questions: Please use the comments section of this website to ask questions or make a comment. I see them all and will try to respond to any reasonable question.

Until my next post all the very best. Webb